So, where was I in my Himalayan tour Part 1 – we reached Haridwar, took a cab to Sonprayag, took the back breaking horse ride to Kedarnath and trekked back. I was exhausted way over my limits, but the plan was to cross those limits and to push those limits and extend them 🙂

This is Triyuginarayan Mandir, with Sumeru Parvat(mountain) in its backdrop.

Story : It is said that Lord Shiva’s marriage to Sati was solemnized here in the presence of Lord Vishnu. Legend has it that the eternal fire which burns inside the temple never extinguishes. This place is way off the track some 14kms trek from Sonprayag but you get a very beautiful view of the valley and the step farmings, the girls of this area were exquisitely beautiful – I had to mention them 🙂

View from the top – Sonprayag

Sonprayag lies at the confluence of the rivers Basuki and Mandakini. Somewhere there is also the hotel that we stayed in. Now we are headed towards Badrinath, fully determined to reach there by nightfall. 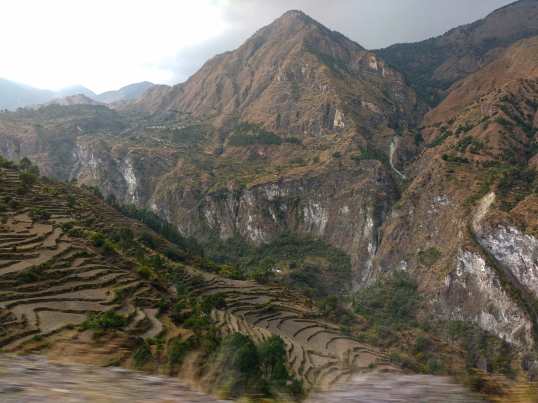 Ohh… the scenic and beautiful valleys and step farms, as “Winter is coming” there were almost no tourists in the area which made our journey even more beautiful and relaxing, but there were no restaurants open too !!! YAY 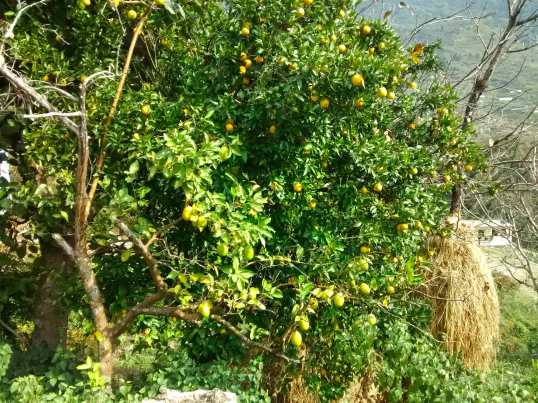 So we resorted to stealing some oranges from someones backyard, when they saw us – we begged for some oranges and finally they let us borrow some. Hmmm….. now I know what beg-borrow-steal actually means 🙂

I was very adamant about getting to Badrinath on the same day, had no idea we would lose day light by 5:15 PM itself and the route would be scary -scary-scary. Somehow we reached … Thank God. The town looked deserted, everyone had left the town and moved down for the winter. We got a room, some hot water and hot food and finally called it  a day.

This is the first thing I see when I removed the drapes in the morning, I had no idea we were in the middle of the great Himalayan range. Badrinath is 10270 ft above sea level. 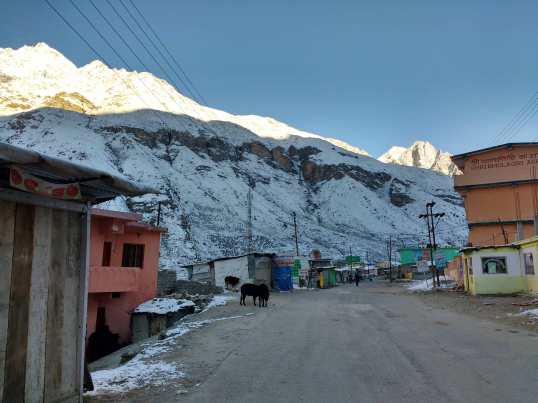 I gazed at the wrinkled and rough hewn nirvana quiet mountains with a sense of awe. 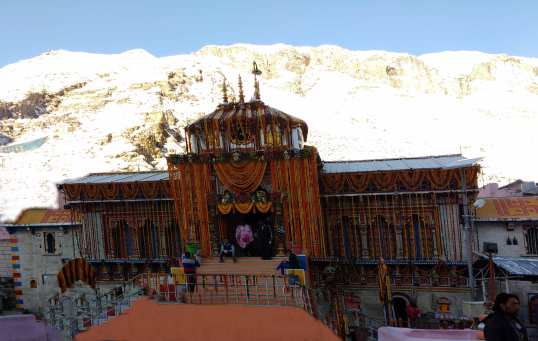 Ohhh… I forgot to mention about the early morning not so pleasant experience, I got up – got amazed by the view – got back to reality – went into the bathroom – turned on the tap – no water – called the reception only to be told that the water may have frozen in the taps because of the low temperatures. Now I understand why people migrate to the hills during this season. We got two buckets of hot water to do what we had to do. This is the first temple in my life to which I went without taking a bath… hmmm

Now look at this – is this a joke!!! A hot spring right outside the temple and the taps in the hotel are choking.

By the time we came out my feet and hands were numb. I hope God is watching me and will reward me appropriately, and he did – the shack cafe – the only place open for breakfast, and the only thing on the menu was Maggi. Steaming Maggie with hot tea – that’s all I need for now 🙂

Mana Village – the last village on the on the Indian side of the Indo-China border.

Can you see the small stream, that’s the Saraswati River, it is still thought to be a mythical river – which no longer exists. Maybe it no longer exists in its full glory but hey!! its still there.

The Story: According to the Brahma-vaivarta Purana: When Ganga-devi cursed Saraswati-devi to become a river here on Mrtyuloka(earth), one of the conditions was that she would only remain on earth as long as rishis and other great sages performed tapasya on her banks. Since we are now in Kali-yuga, there are no longer these great souls performing austerities, so she vanished.

The tour guide’s version: In the above picture we saw Vyasa Panthi – it is the place where Ved Vyasa was reciting Mahabharata and Ganesha was writing it down, Vyasa got disturbed by the gurgling sounds of Saraswati’s water and asked her to slow down. But she wouldn’t listen so he cursed her to go obscure. So today you can see Saraswati only here in the Himalayan region of Mana Village where she originates and after that she goes underground only to emerge at the Triveni Sangam in Illahabad where Khumba Mela takes place.

Now it was time to leave the abode of gods and return to lower grounds where the devilish minds are at work.

Karna Prayag – Confluence of Alaknanda and Pindar Rivers and the last of the panch prayags.

I was supposed to take a dip in these Panch Prayag’s to attain Moksha but given the temperature of 8 degrees Celsius I’ll have to find other ways of attaining Moksha. 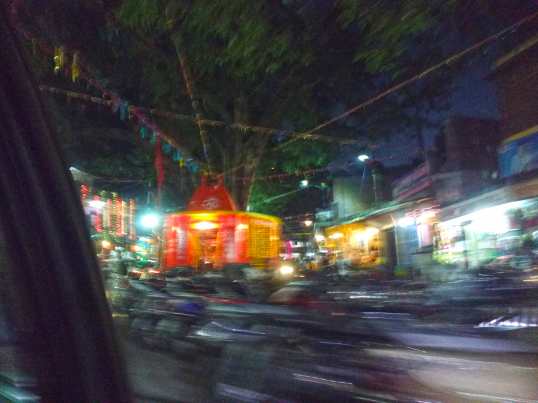 Rushikesh – situated at the foothills of the Himalayas, besides Ganga river. It is famously known as the place for studying yoga, meditation and for temples and ashrams. To me it looked like the whole town’s having a hippie party.

Evening Ganga aarti at Haridwar – the mesmerizing chanting of the mantras during the beginning of the aarti was the best way of concluding this trip. 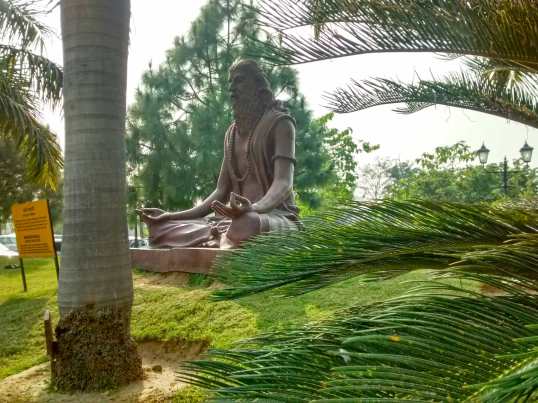 A short visit to the Patanjali Yog Peeth on our way back.

Next time I go to Himalayas, I don’t want to be time bound and just let my instincts guide me.

"The only source of knowledge is experience." - Albert Einstein

Travel adventures and tips from someone who likes going off the beaten track.

Life on the Big Island of Hawaii

Sharing unique images that I have captured from around the world. All images are copyrighted by Ravi Patel.

Faith saved us from the savages that we were, losing faith makes us savages again

Welcome! Hope you see some artwork that pleases you, if not now, maybe next time...

Mostly photographs with some words by this arty scientist...

STOPS ALONG THE WAY

Remember who you are!

"The Most Extraordinary Abstract Art Photography You May Ever Experience".

Crafting For Those Dedicated to Experimentation

An artist with an irresistible urge to create!

lost in the pages of books

trips, tips, and tricks for all things travel. Come with me as I explore the world!